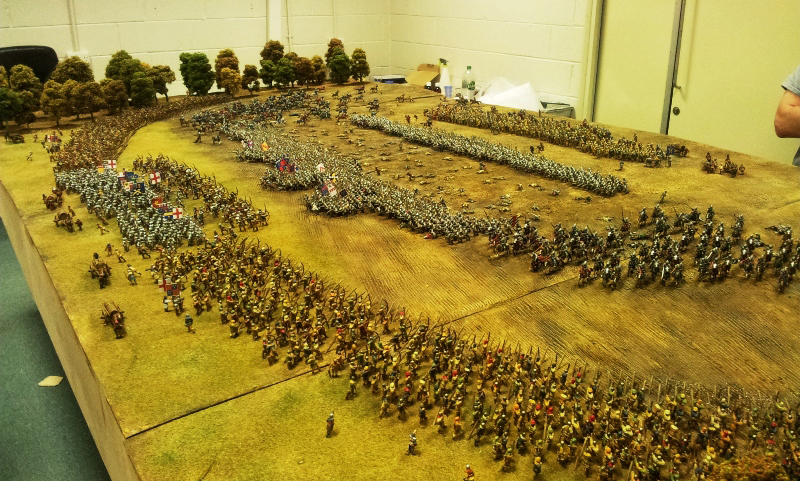 In early 2014 we were approached by David Marshall and The Perry’s about the prospect of being involved with the painting of a large number of figures for a display commemorating the 600th Year Anniversary of the Battle of Agincourt which was to be featured in the Tower of London and then moved to The Leeds Armoury. As you can imagine we were quite excited about the prospect of having our work displayed there, and the amount of figures they wanted which would keep us busy for quite some time.

At the time the details with the exact size of the display were a little vague as they were still being discussed but there was initially talk of the display being around 13,000 figures with several painting studios involved. This was eventually reduced down to around 4,250 – 4,500 figures, more importantly for us though was the news that we would be painting almost all of it.

The table was being built by David Marshal of TM Terrain (www.tmterrain.co.uk), and the figures were sculpted and cast by the Alan and Michael Perry (www.perry-miniatures.com). Due to the desire to keep the project under wraps we were not unable announce our level of involvement in the project or even to post of its existence. Fortunately with the display opening to the public on 24th October that is no longer an issue..

The miniatures we painted are broken down as follows 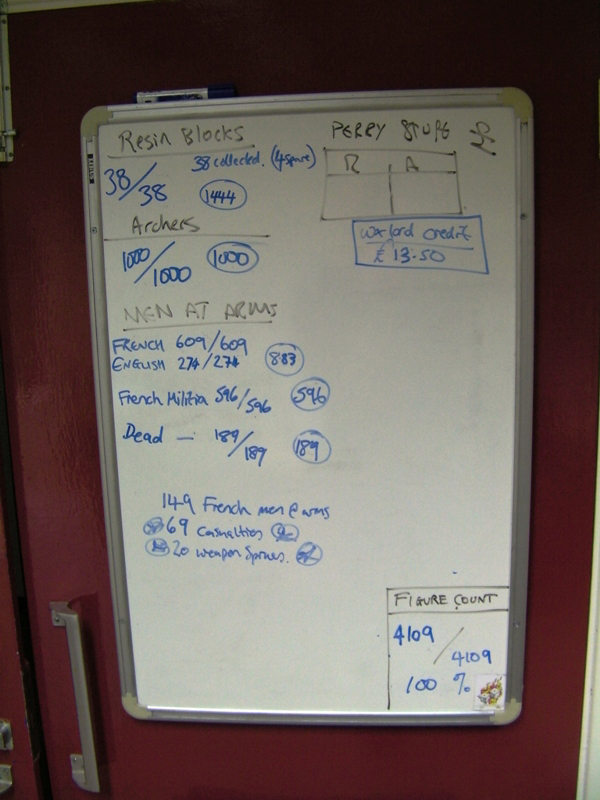 … Which by our count comes in at a whopping 4109 miniatures (math would say its 4112 but we’re going with what’s on the board). On top of what we have done there is an additional 150 or so models painted by other painters and friends of Alan & Michael that wanted to contribute. Some of these figures make up the characters and lead persona on the table such as Henry himself. The French Cavalry that were painted by David Marshall.

Initially there were more figures for us to paint, we had around 350 more archers to paint but it was decided when the table started coming together that it would not be necessary to use these as the English line looked far too big and dominating already with 1,000 archers on the board. The French army outnumbered the English, but due to deployments the English were spread across a line and the French more densely packed. It was important for the display to look correct so some models were left out from the English ranks and more were added to bolster the French lines.

Initially the colour palette and brief that we had been given seemed relatively simple at first but after the 1000th or so model it all began to blur a bit. On multiple occasions we both suffered from a term that we have coined ‘model blindness’ an in office term for what happens after you paint more of the same types of figures then you can remember and for something approaching 6 hours a day and begin to miss bits, a hand or back of the leg, maybe only paint one shoe or miss out an entire colour on 5 models. The funniest bit being that there was no rhyme or reason as to what got missed and you would only notice it and correct it when you applied the next colour… 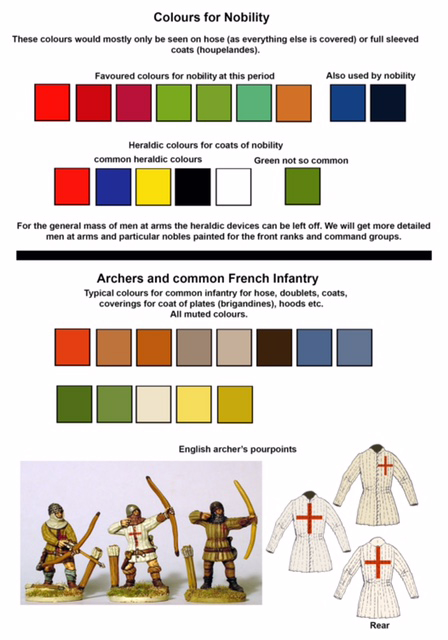 The palette is pretty close to being identical for both armies, the English have red crosses where as the French have white, colours on the commoners were drabber than those on the nobles. We did have to make some concessions in order to get the display to ‘look right’ as oppose to being 100% historically accurate, but then who’s to say what we’ve done isn’t pretty close as it’s not like any of us were actually there.

The big one for us was to unify the boots, belts and weapon colours, by doing so it lets your eye focus more easily on the models when they are presented in large groups or formations. This also helps to give the whole display some additional cohesion despite the multitude of colours. Simply put what has been achieved looks right; it was hard to imagine the amount of colour going on with these models when we started them, or to even think about how many shades of the same colour we might have to use. We restricted the use of certain colours like red, as it was the colour of the English cross and could potentially be mistaken for blood if not used sparingly; red is a great colour to help make the models pop out at you so we mainly used this on the hoods but did use a darker red on some models.